In the past few years battery technology has advanced at a rapid rate, resulting in a rapid decrease in the cost of electric storage and the associated systems (Fig 1).  Although this has been driven primarily by electric vehicle adoption, home battery systems have been direct beneficiaries. According to Bloomberg New Energy Finance “Lithium-ion battery packs are selling at an average price of $209 a kilowatt-hour, down 24 percent from a year ago and about a fifth of what it was in 2010, a Bloomberg New Energy Finance survey shows. The rate has further to fall — reaching below $100 a kilowatt-hour by 2025, according to a report by BNEF analyst James Frith.  Developers of stationary storage systems — like the kind that back up rooftop solar panels — can expect to pay 51 percent more than automakers because of much lower order volumes.” 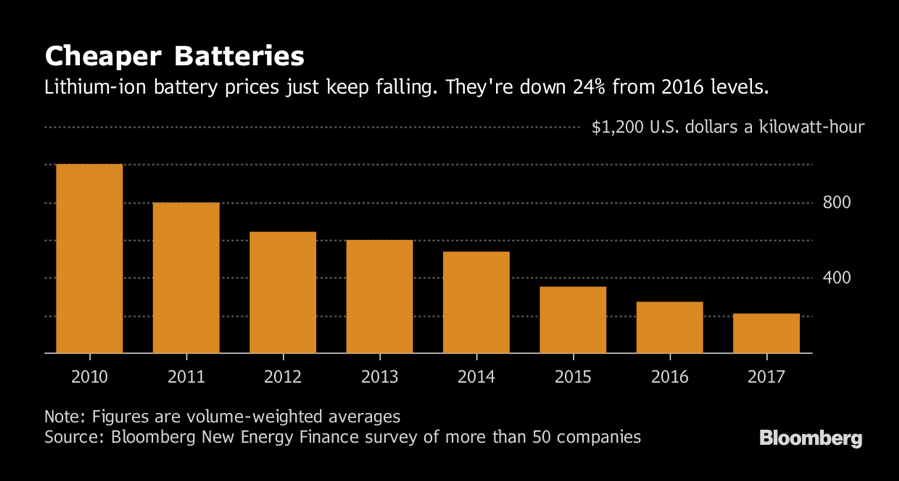 If you’re considering installing solar panels in the near future, you probably want to consider adding battery storage to your system. We’ve asked Ed Zinthefer, President of Arch Electric, to answer some of the common questions from the homeowners before they install a new system.

Ed is a 20+ year Master Electrician with vast experience in large industrial wiring, switch-gear maintenance, distribution and preventive maintenance, hazardous and classified environments, intrinsically safe electrical systems, and complicated control systems. In 2005, Ed became one of the first Wisconsin NABCEP Certified Solar PV Installers (North American Board of Certified Energy Practitioners). Years later, he became one of nine IREC Certified Master PV Trainers (Interstate Renewable Energy Council). He is also a registered Focus on Energy Compliancy Agent – they hire Ed to check other contractors’ work. Ed has been a regular instructor at technical colleges and energy organizations for the past 10+ years.

LSC: What are the reasons for combining batteries with renewables in a home or commercial system?

Ed: Batteries give you the security of having energy during periods of utility power disruption.  Storage also allows consumers to utilize energy from batteries at lower costs in certain circumstances. Financial strategies exist to consume stored energy or charge batteries during times of higher utility rates and during peak demand charges.

LSC: What has kept batteries from becoming more common?

Ed: Previous battery systems relied on lead acid batteries like the ones in your car.  Maintenance factors and high costs associated with these traditional chemistries were a barrier.  In addition, traditional utility power has cost effectively met the needs of most consumers.

LSC: Are there any reasons that may change in the near future?

Ed: Industry sectors are developing energy storage solutions that are becoming more efficient & cost competitive. Although demand and price is high, significant reductions in cost have been experienced over the past 12 months and are expected to continue.

LSC:  If someone is considering adding batteries to their current (or planned) rooftop solar system what site-related concerns should be addressed.

Ed: If you would like the solar to charge the batteries during periods of utility loss you’ll need a system that is designed for that? There are products that act as stand alone back up sources only, and products that integrate with solar which allow islanding during periods of utility disruption. You’ll also need to decide what (and for how long) specific loads might be required power during a utility outage.

LSC:  Are there reasons to consider a battery system if you don’t have renewables?

Ed: Yes, back up power security. The industry already has products available to purchase and store low cost power, then be able to dispatch the energy during periods of higher utility rates or to mitigate demand rates.

LSC:  It seems like battery storage is still pretty new to this area. Are the technology and the local suppliers ready to install a system that I’ll be happy with or should I wait?

Ed: Interestingly enough most of the first solar installs were with battery storage for off grid solutions. Batteries are regaining popularity as their efficiencies have improved and costs have come down. Certainly, these trends will continue. However, there are great batteries solutions available now that we are currently installing. In addition, the 30% Federal Tax Credit is still available through the end of 2019 and can be applied to battery storage.

Reference: “The Latest Bull Case for Electric Cars: The Cheapest Batteries Ever” https://www.bloomberg.com/news/articles/2017-12-05/latest-bull-case-for-electric-cars-the-cheapest-batteries-ever

Spring Member Bond Drive: Get your Slice of Sun now!